A couple of years ago we sold a computer to an ex-colleague of my wife's, a professor in a school of design and art in Barcelona.  At his home, I assisted him in installing and connecting the computer to the Internet, then he had the nice gesture to invite me to lunch.  Sitting at the table with his daughter, a young woman in her twenties, they started the chat asking me what I did for a living (Catalans resemble Americans in this annoying custom.)  When I told them I was selling web hosting, the daughter, after telling me she worked as a nurse (more noble profession than mine, of course,) started talking scornfully about the Internet boom.  I supported her idea saying the Internet is mostly used as a shop window and, appealing to their sense of humor, I added that my wife's web site, being its contents mostly illustrations (she's a graphic designer) has much more success than mine which consists mostly of text; ‘You know, drawings catch your eye,’ said I, a bit cynically.  ‘But, drawings are art!’ her father cut me (the trailing “ignorant” silently echoed.)  I could've mentioned him that, in my web site, besides novels and articles mostly of artistic-philosophical matter you can enjoy also a comic, all authored, edited and published by myself, but, to tell the truth, neither that nor the more than twenty years I devoted to music make me feel confident about what “art” exactly is, even so, I'm still able to recognize art in a talented seller as well as in this guy's cooking, so I decided to chat less and enjoy the meal.

My point was popular knowledge is right in that images outsell text.  Days ago, a friend of mine praised my comic strip for the umpteenth time, something he never did about any of my writings.  I'm pretty sure I can be equally eloquent either writing, drawing, composing music or farting Morse code, besides, my coherence makes me repetitive.  Anyways, my friend's praise inspired me to draw a new episode of Gooevo.  As I always do, once I finished it I showed it to my wife.  She didn't understand it.  I made a second attempt adding some details to give her some clues; she still didn't get it.  Finally I gave up and published it without further modifications.  I sent a message to my friend with a link to the freshly published episode.  He didn't get it either.  Then, I remembered an aphorism I had published long ago (number 7) where I explain the same idea; it may take you a bit more patience and time to read, especially if you've lost the habit, but there's more chance you'll get author's idea.  Not to mention flexibility, not in vain ideograms evolved into letters that allow us to build words and then sentences in a grammar capable of representing from the simplest to the most complex idea.

All this inquiry remembered me a comic strip I read being a child, authored by our dear Quino (text translated on the table below): 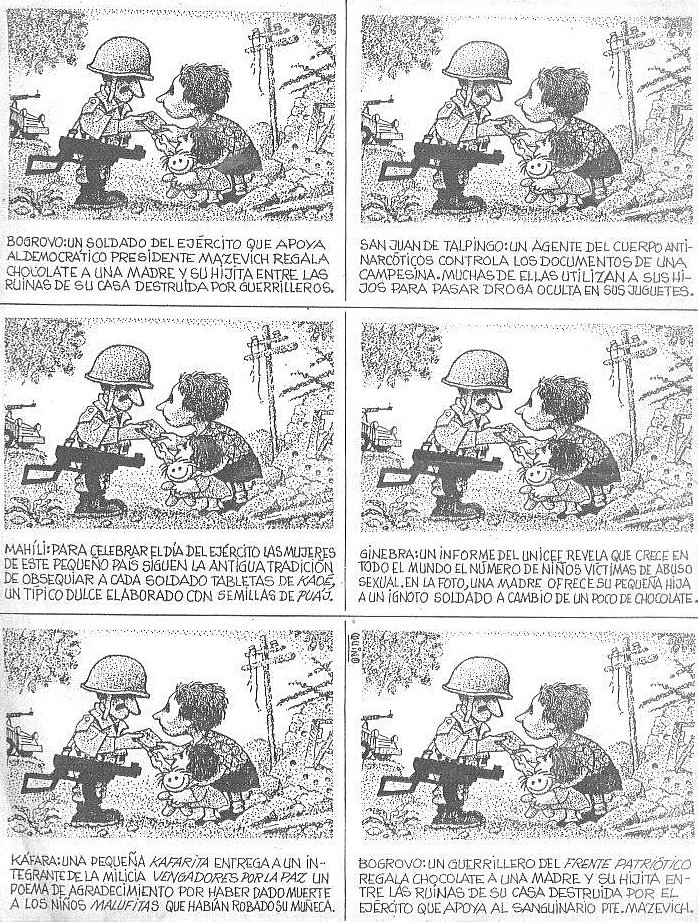 And you, reader, what do you think?  Would my comment “drawings catch your eye” upset master Quino?